Get Started Today!
We are now accepting new students in our academy!
VIEW OUR WEB SPECIAL & LEARN MORE

Secure your spot and get started today with our EXCLUSIVE offer!

By opting into the web form above you are providing consent for Gracie Apollo Beach to send you periodic text messages. Standard rates may apply. You can reply HELP at anytime or learn more. You may opt-out anytime by replying STOP.
We are now accepting new students in our academy!
VIEW OUR WEB SPECIAL & LEARN MORE

Secure your spot and get started today with our EXCLUSIVE offer!

By opting into the web form above you are providing consent for Gracie Apollo Beach to send you periodic text messages. Standard rates may apply. You can reply HELP at anytime or learn more. You may opt-out anytime by replying STOP.

Luis and Erin and dedicated practitioners to the sport and art of Jiujitsu. They are not only professionals but superb people. They come with the highest recommendation. If I lived in the area, they would be coaching both of my children.

I just signed up with GAB, as Luis was highly recommended by my close friend. After talking to Luis on the phone for 10 mins, I could hear his passion for BJJ as well as his professionalism. One thing I've noticed about this art, the further people advance, and the more time they are involved, the more humble they become, it truly is amazing.
Looking forward to the grand opening and the grind.

Met Luis when i was living in Florida attending school. I was a blue belt he was a brown. I’m never going to forget how he went out of his way to answer questions i had on certain moves or certain positions, just because he “loved jiu jitsu and wanted to spread the art.” He’d stay before or after with me for as much as 20 minutes sometimes. That really stuck with me. Some of these moves he showed me years ago i still use! This is a guy who’s a CLASS ACT and a GREAT PERSON . Cannot recommend him enough!!!

Luis is an amazing, passionate instructor. His knowledge and dedication to the sport is unmatched. He's great with kids and has extreme patience when teaching.

Luis is a great instructor and person, I highly recommend you train with him.

You will never find another team of people teaching with the passion and love like Coach Luis and Erin. They are the most genuine people I have ever met. I would trust them with my life. They have taught me so much!!! Take your kids, teens, wife, girlfriend, boyfriend, etc. to this school! You won’t regret it!

Coach Luis is one of the most genuine people I know. He is passionate and really cares about his students. His passion, strong core values, and a very solid jiu jitsu game, makes Coach Luis an amazing instructor. If you're looking for a quality Brazilian Jiu Jitsu school, whether as an adult or for your kids...You can't go wrong with Gracie Apollo Beach.

I’ve had the privilege to train and learn from Professor Luis, and Erin for several years now. The passion and knowledge they bring to the mats is top notch. Whether you are a brand new student or a seasoned vet, they will help you reach your goals and have fun doing it.

I have known and trained with Professor Luis since he was a purple belt. Luis is an amazing jiujitsu teacher and student! He's also one of the best kids instructors I know. If you are in the area and looking for a good school for you or your kids, you found it.

I️ am still taking private lessons with Coach Luis and Erin Harpe and I️ have seen my technique sky rocket with their knack of breaking down the fundamentals so I can better understand and able to continually excel in this art. I’ve never felt so inspired to learn more until I️ met these two. I’ve known them since I️ started my journey and when it comes to teaching or just everyday life struggles these two are loyal til the very end. I️ can’t wait for the 24th! 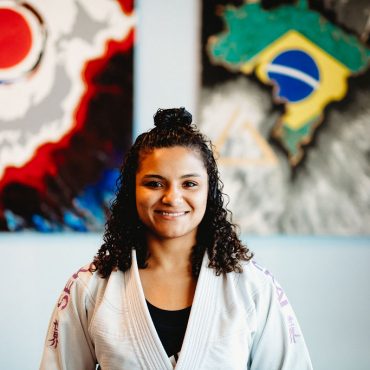 Coach Erin started training Jiu Jitsu at the age of 5 and learned from her father, Royce Gracie Black Belt, James Harpe. Coach Erin began competing at 9 and immediately fell in love with the competition scene. In 2013, 19-year-old Coach Erin moved from Connecticut to Tampa, Florida to train with the Gracie Tampa Network (created by Royce Gracie Black Belt, Rob Kahn) and fulfill her dream of becoming a successful MMA fighter. Since moving to Florida, Coach Erin has not only blossomed into a high level competitor and professional fighter, but she developed a passion for teaching our women’s monthly self defense and training competitors.  When asked what her mission at GAB is, Coach Erin states, “My mission at GAB is to have everyone feel at home, learn how to protect themselves, get a great workout, and have fun in the process.”